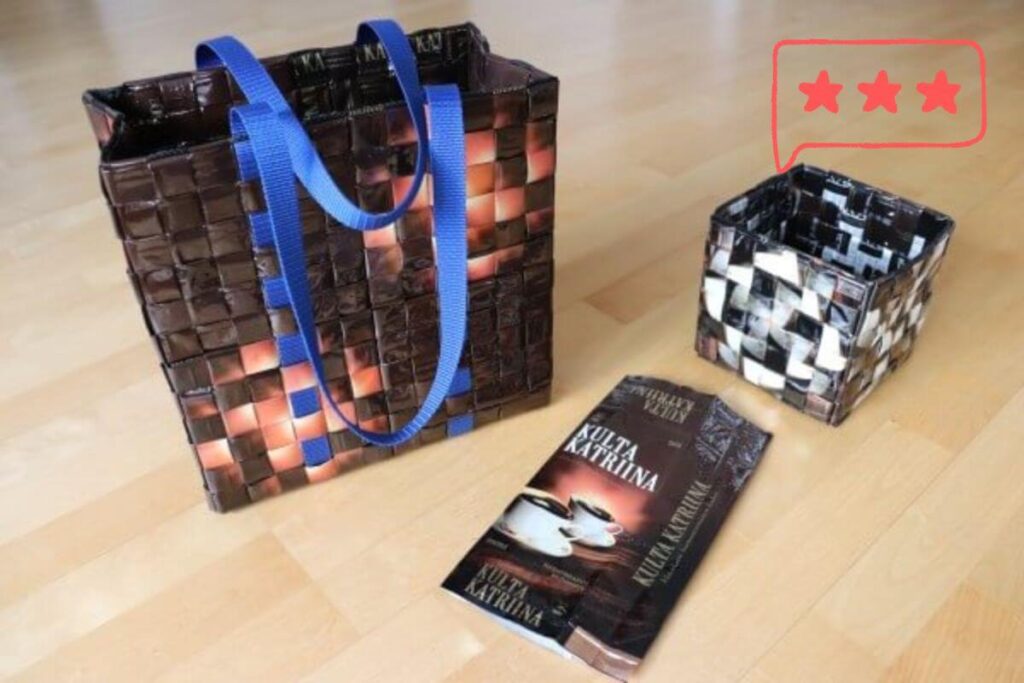 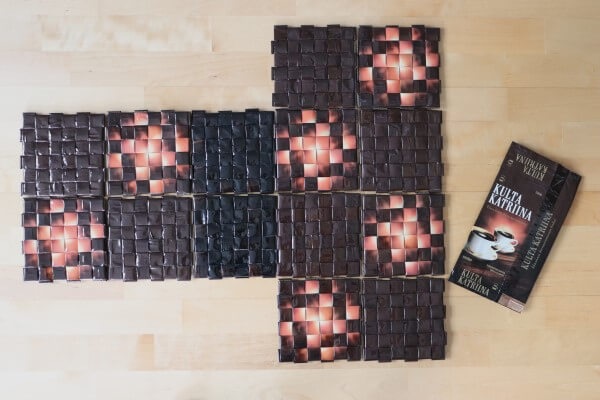 This bag has been waiting to be put together for a long time, because I prefer to keep the squares as squares, rather than ready-made bags, which take up much more space at home. And I only collect the bags when there is a need for it. This bag was given as a gift, so I got rid of a few squares again. 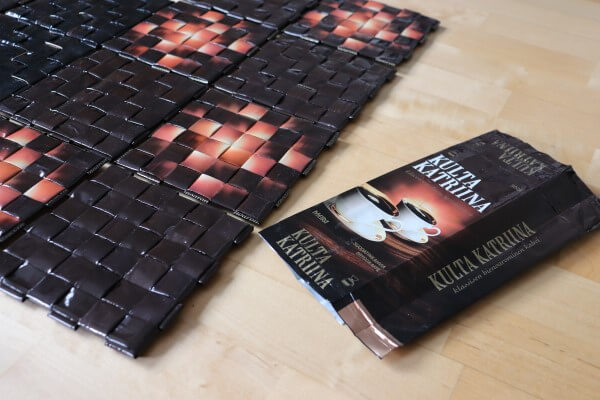 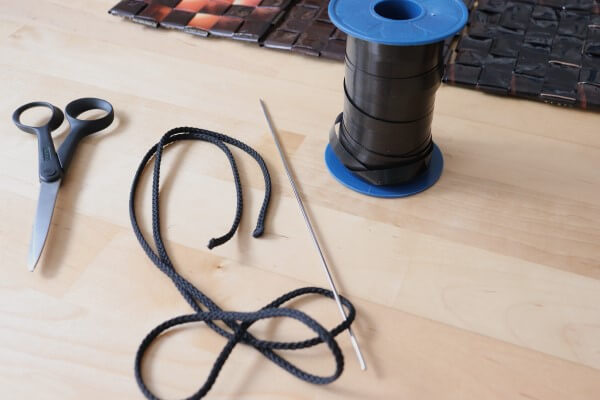 I again used black gift ribbon to connect the squares and finished the top edge of the bag with black anorak cord. As a needle, the same old mattress needle with a rounded tip.

There was enough material left over from the same coffee bags for four squares, where different patterns have been tried out from the coffee saucer. The bottom of the basket has a black square woven from other Kulta Katriina coffee bags. 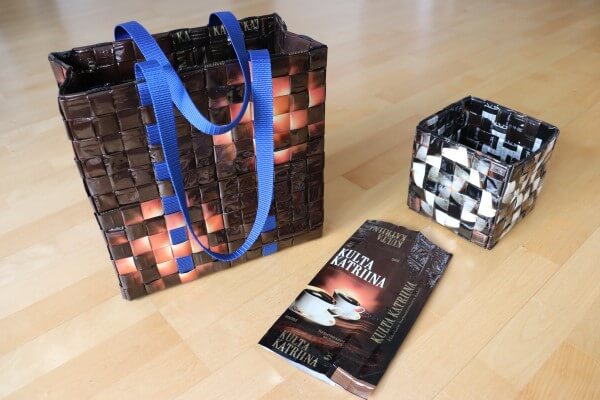 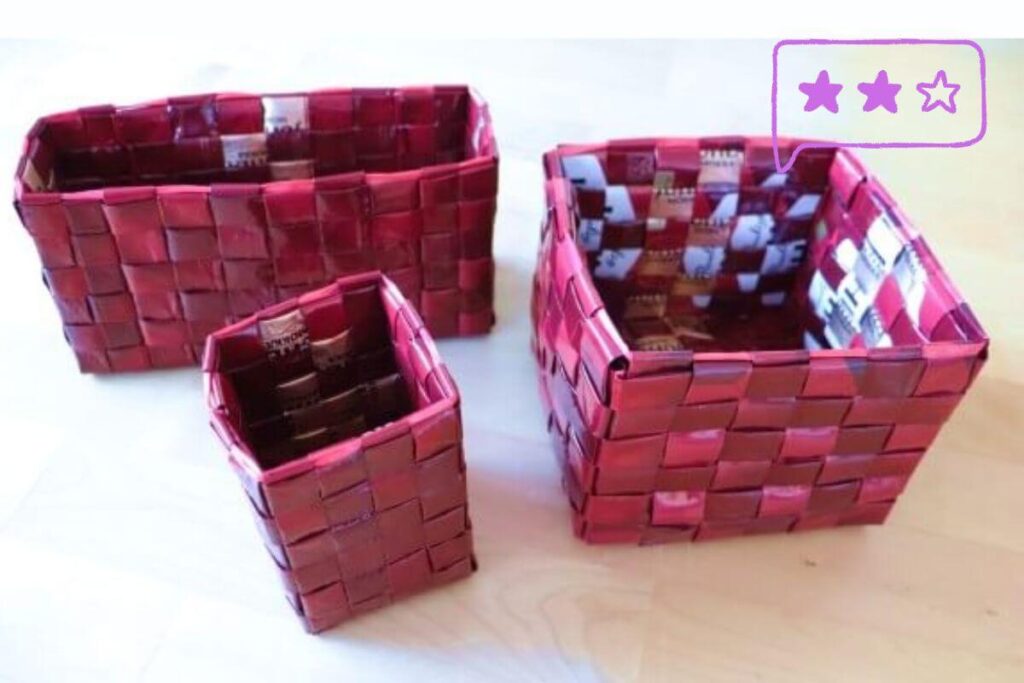 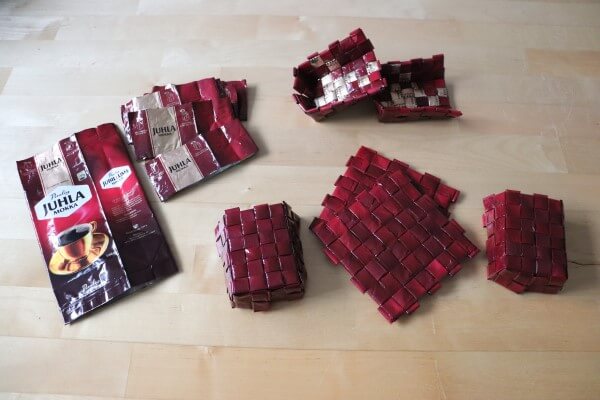 Of the previous Juhla Mokka bags, there were all the top edges of the coffee bags left. Some of the remaining pieces were enough for 6,8 cm strips, but the torn bags I had to cut strips 5,1 cm wide and weaved 6×8 and 8×8 squares and corner pieces. 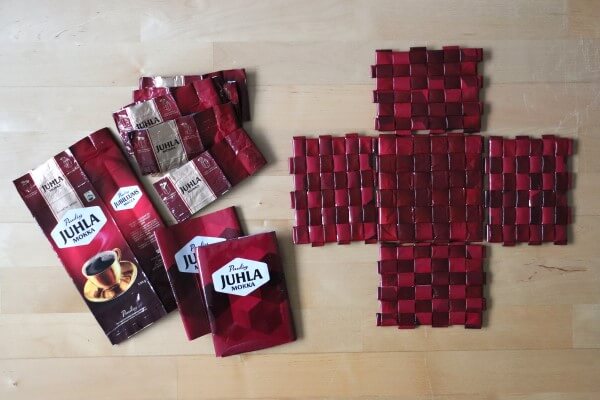 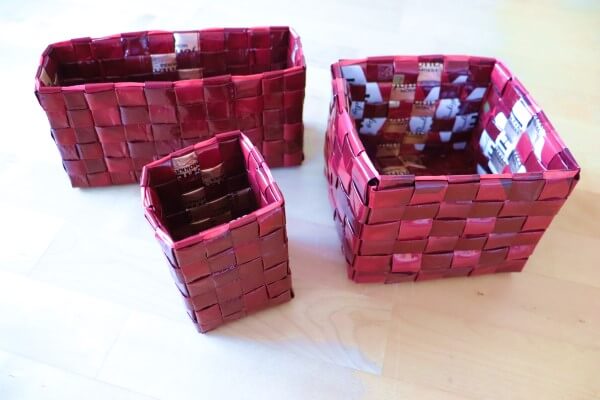 The end result is a high basket combined of two two-cornered pieces to store pens, for example. The second basket is long and narrow and stacked from two identical two-corner pieces and two 6×8 squares. The third basket is a combination of large and small Juhla Mokka bags slightly lower than a cube basket. 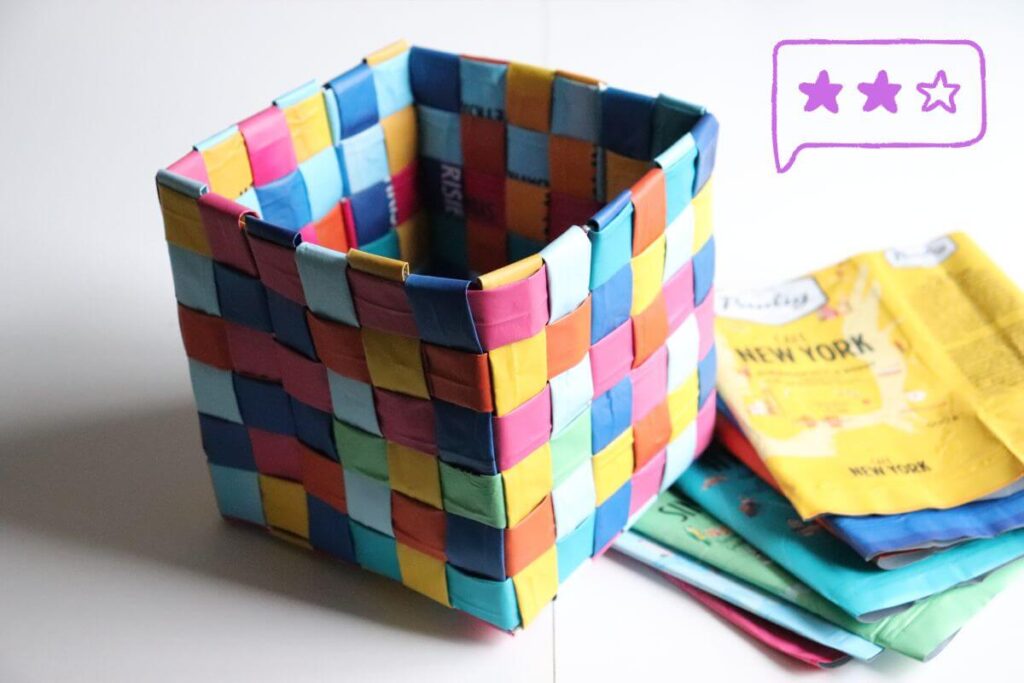 Paulig’s city coffees have recently a new flavor and there are now seven different colored coffee bags. For these, I can see which flavors are most popular among coffee bag collectors, with orange Barcelona and turquoise Havana bags being the least common. And of course the latest green Singapore which I only had one for this project.

Of all the city coffee bags, I used only the monochrome parts of the top edges for this basket, from which I got to weave the colorful checkered squares. I avoided adjacent squares of the same color by weaving strips of the same color in one square in the same direction. For example, in the top square of the following image, yellow, blue, and an orange stripe are woven in one direction and light blue, pink, and turquoise in the other direction.

When the squares were joined, adjacent parts of the same color appeared at the seams, but this resulted in fewer and smaller monochromatic areas than the intersecting strips woven into the squares. I also laid out the squares in the basket a little differently than usual because I wanted the colors on the sides not to form a regular coloring. In the previous image, you can see how the orange and turquoise strips form every other small square on the same line.

The squares are first joined together side by side and into a ring shape that forms the sides of the basket. Finally, the base is attached to the rim of the basket. A 1 cm wide gift string has been used for connecting the squares. The upper edge of the basket was left unfinished, because in light use the edge does not unravel easily. 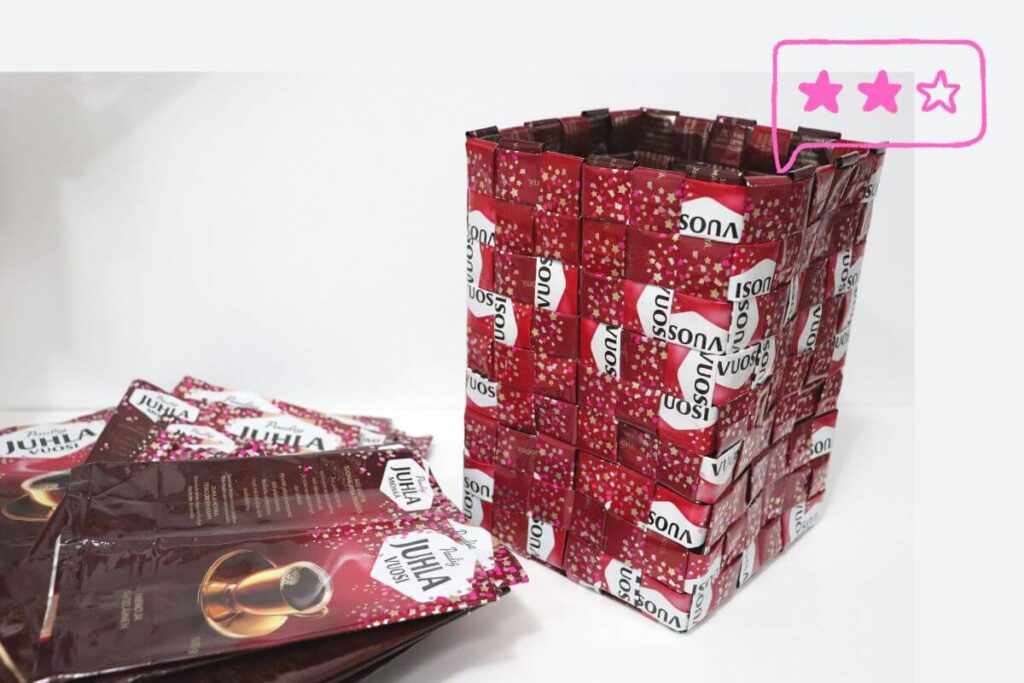 After weaving the confetti-patterned bag, there was still some confetti parts left of the coffee bags. In these, however, logos and texts are in the way, but that doesn’t necessarily mean the pattern wouldn’t look great anyway. The width of the cut strips is 6,8 cm.

The pieces of the coffee bag basket are connected to each other with a gift cord, which has also been used to cover the seams (instruction on the video above). The top of the basket was left unfinished. The size of the finished basket is about 22,5 x 15 x 15 cm. 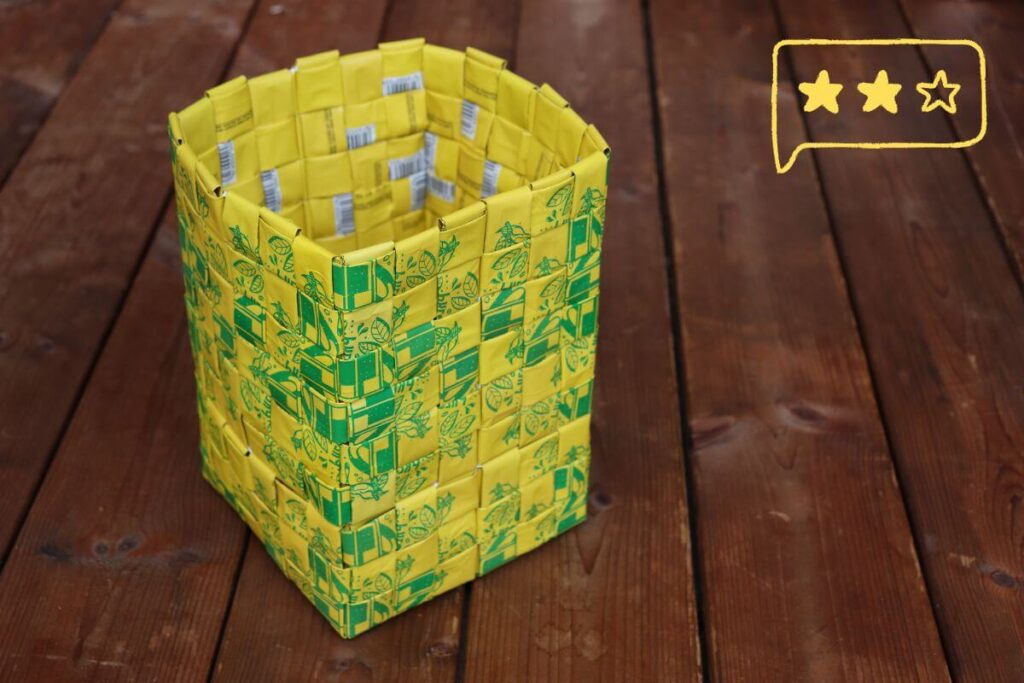 Paulig’s Brazil coffee bags have green images and text on a yellow background. This basket consists of four squares and four corner pieces woven from 6,8 cm wide strips cut from the bottoms of the bags. 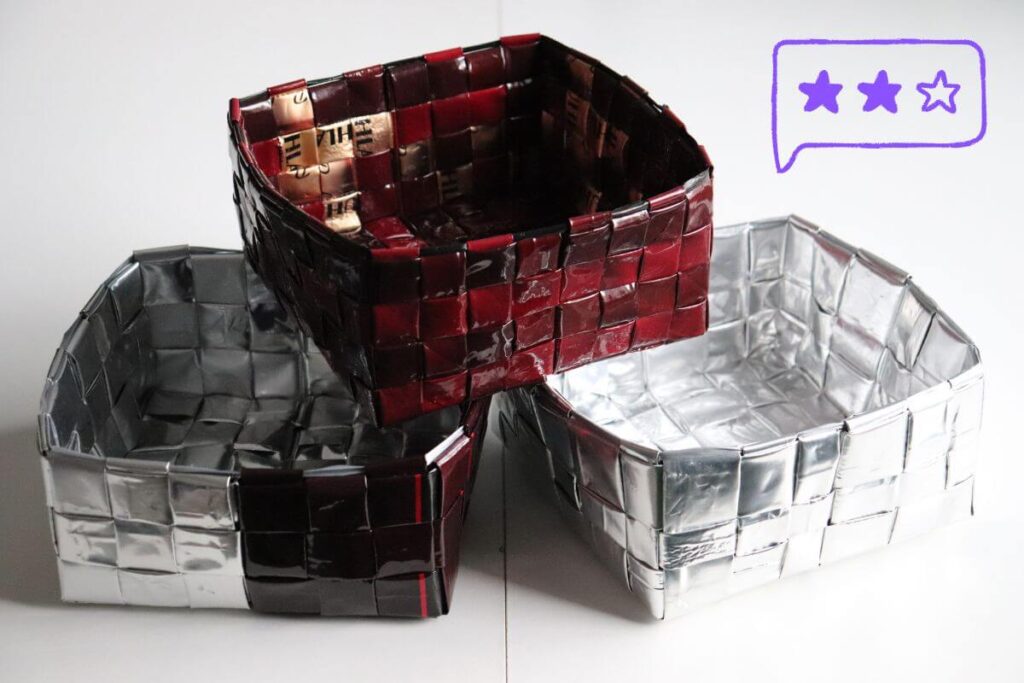 The three corners of the first basket are woven from the silver-colored insides of the Presidentti coffee bags. The fourth corner is woven from Juhla Mokka dark roast from the tops of the coffee bags with a wide black stripe on a brown background and thin metallic red stripes.

The second basket is woven from 5.1 cm wide Juhla Mokka strips. With these narrower strips, the basket feels a little more upright. The third coffee bag basket is woven from strips of Presidentti bags of different widths. The widths of the strips are 5,1 cm; 6,8 cm and 9 cm. There are three widths in each one of the corner pieces. 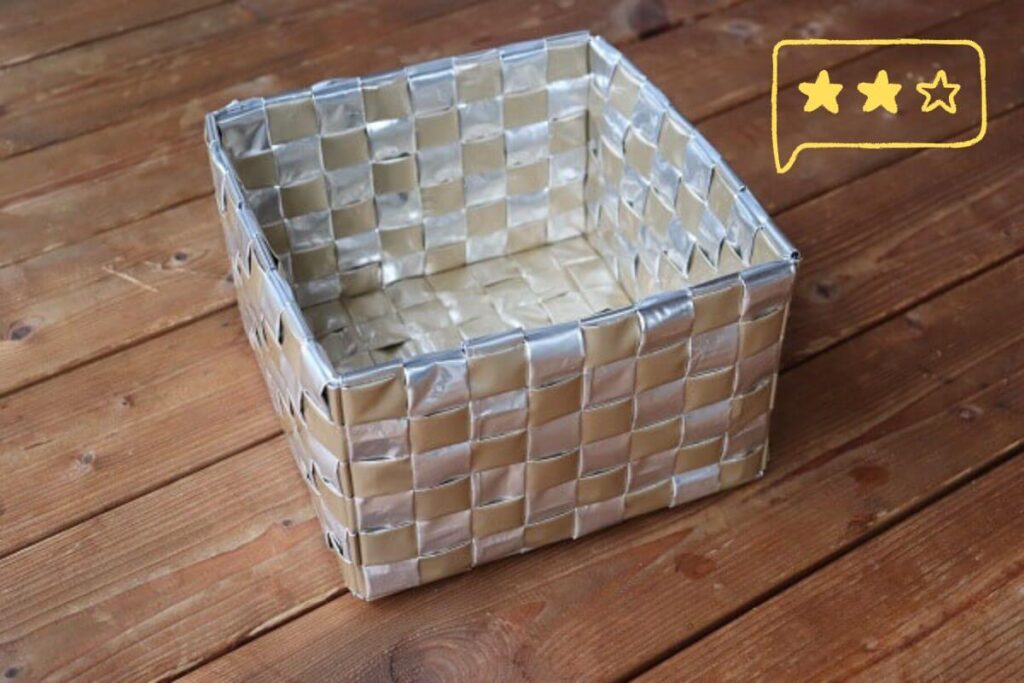 Less often, non-square shapes are made with square weaving, but once I got excited to try combining bags of different sizes, I could’t leave in one square. This rectangle combines the Kulta Mokka bags and the silver inner layer of the Presidentti bags. The Kulta Mokka bags have been cut to a width of 6.8 cm used in 6×6 squares and a new width of 8.1 cm has been calculated for the Presidentti bags.

I decided to use these rectangle pieces to make a basket where the shorter side of the rectangle becomes the height of the basket. So the bottom square had to be woven from Kulta Mokka bags with the strip width of the Presidentti bags in the side squares. This way the hinges fit together and the bottom square size is correct. I used a silver gift cord to join the squares and finish the top. 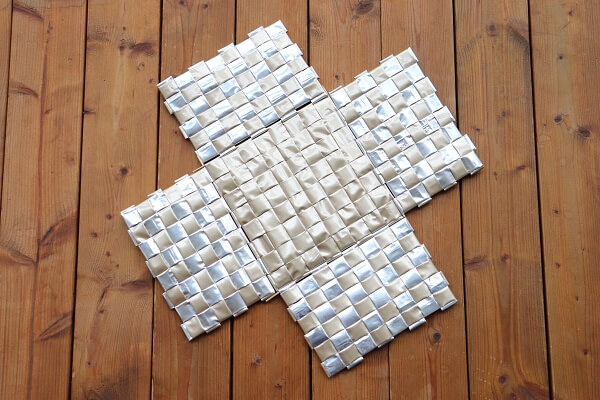 This became a nicely bigger basket than, for example, a cube basket made from Presidentti bags alone. The proportions also seem great.