Square weaving technique can be utilized in various variations to produce planar structures and corner pieces. The strips cut from the coffee bags are folded in the same way, but woven in a different order. The same methods as for weaving squares can be used to design strip widths and patterns.

Corners made with square weaving technique bring new possibilities to the shapes and sizes of woven baskets and bags. Hinges are formed in the corners in the same way as in ordinary squares, so that the corners and squares can be combined with each other. Watch the corner piece weaving video.

You can view all videos with corner pieces on ruutupunontaa YouTube channel on the embedded video playlist below.

The corner can also be woven from strips of different widths. You just have to be careful about the order of the strips so that the corner folds are also between the strips and there aren’t folds in the middle of the strip. Again, when combining widths, it is good to remember the connectivity of the pieces and the compatibility of the hinges. 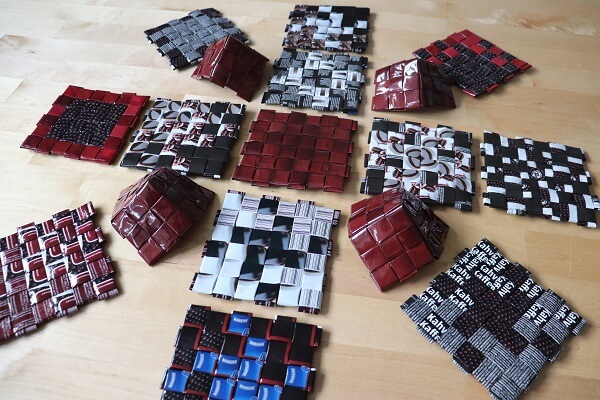 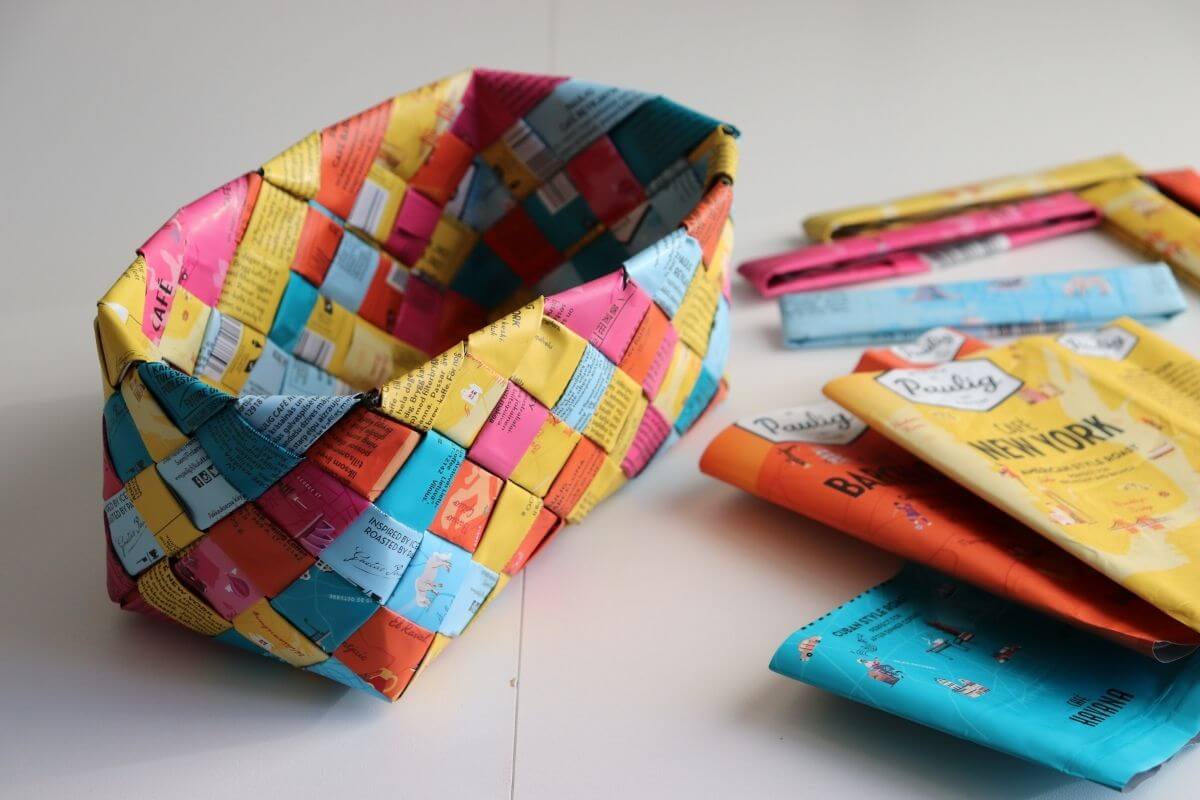 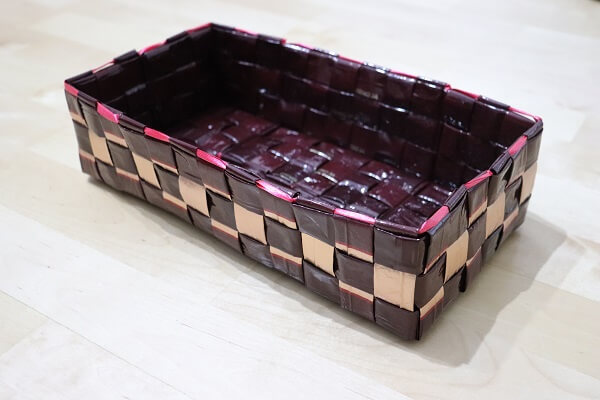 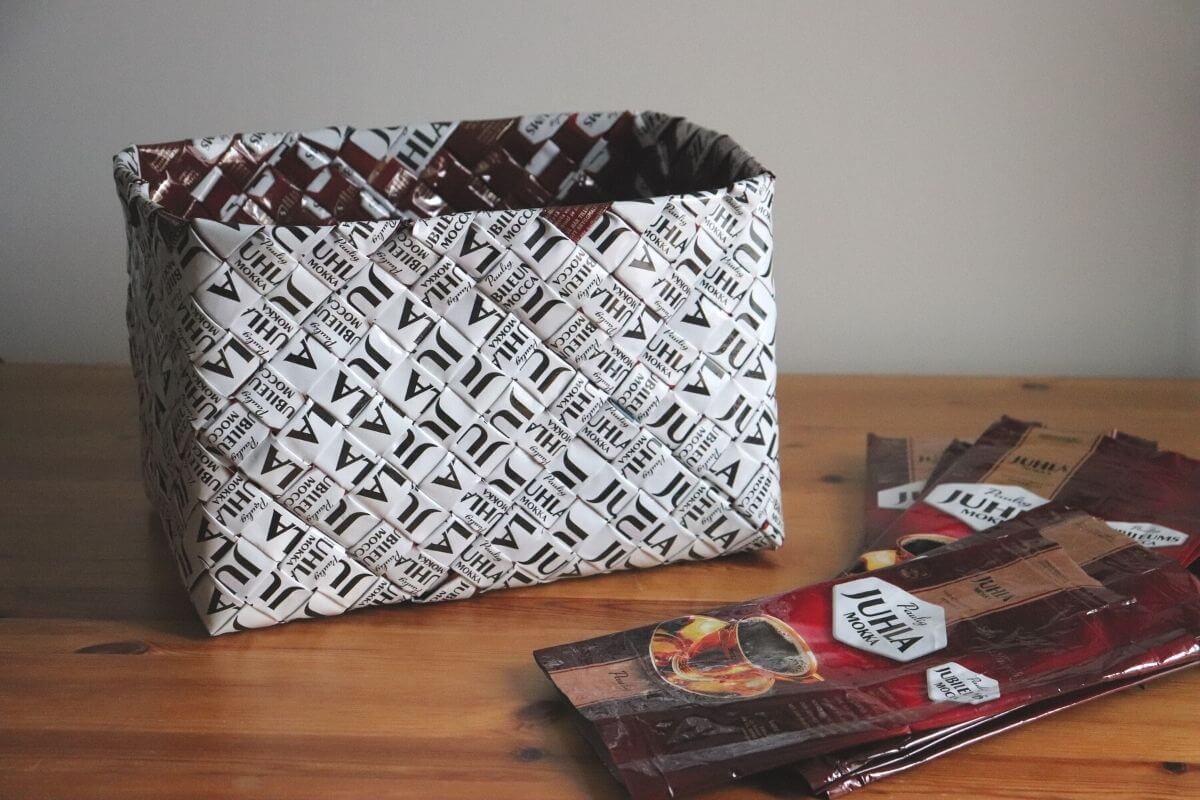 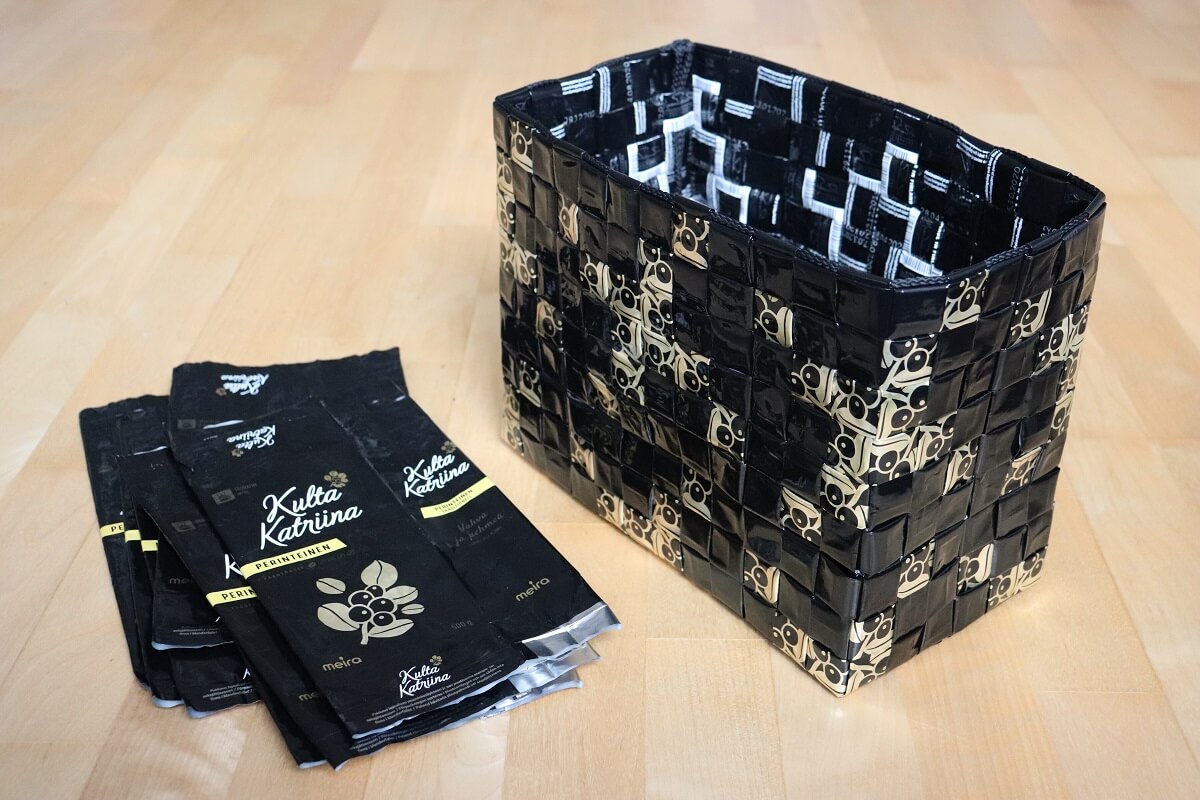 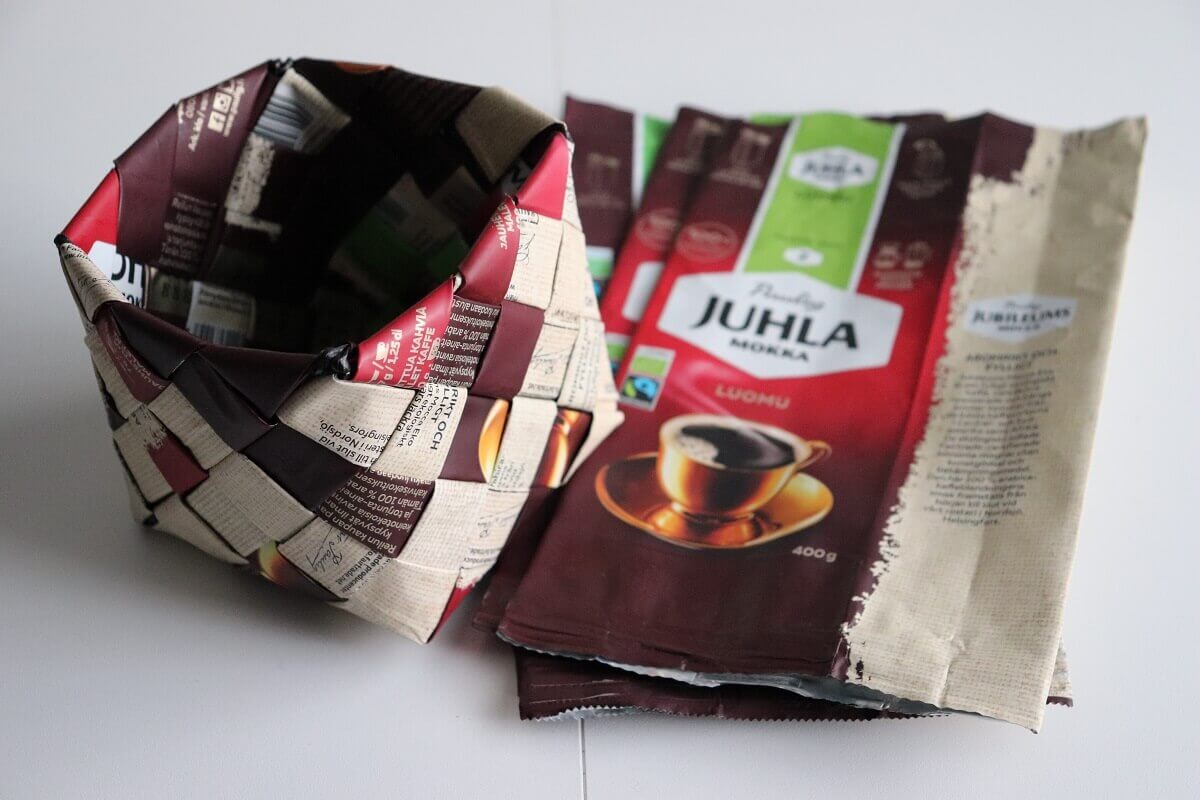 You can also weave several corners in the same piece. Two adjacent corners can be woven if the number of adjacent strips is divisible by four. There are eight strips in this piece, with one corner consisting of four strips. Half of the four, i.e. two strips, are not woven. The corner is first woven into the other half. The woven pieces from the two corners can be used, for example, to make a small high basket that works great as a pencil jar. 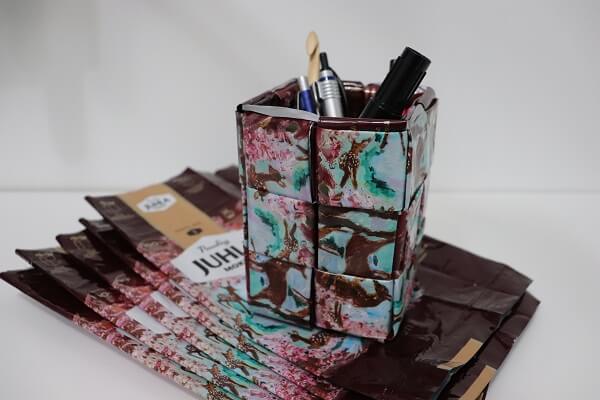 It takes 12 strips to make one 8×8 basket. After weaving the second corner, the pieces of the two corners can be used even with another similar one, or weaving the corners to the other edge as well. The example in the picture uses strips of different colors, which are disassembled and replaced by other corners. 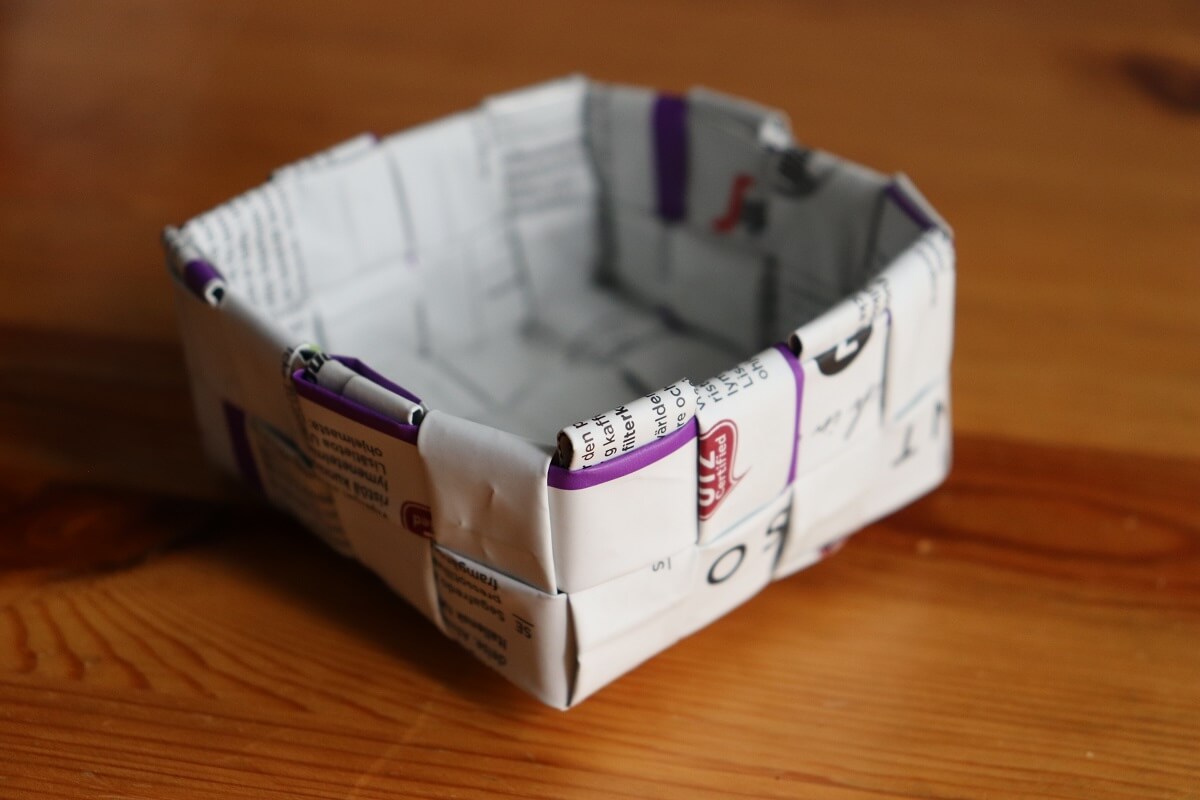 Square weaving also bends into envelope corners that can be used to achieve a variety of flatter shapes. It takes half the number of strips of a regular square to weave an angle. The weaving is started in a slightly different way: first, one quarter (1/4) of the square is woven, ie half of the strips are woven vertically and half horizontally. The other ends of the strips are turned to the reverse side of the piece and continue weaving until the corner is complete. The weaving of the envelope corner is shown in the attached video. You can find an example of the use of the envelope corner on YouTube! 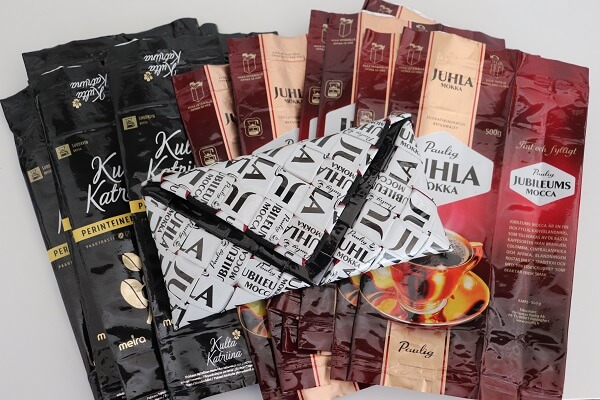 Triangles are a great addition to the different woven piece shapes. With square weaving, it is possible to make 45 degree angles by changing the weaving direction of the strip in the middle of the square. In a woven triangle in this way, one side is a little messy and the edge is not as sturdy as the other edges of the triangle, but it can be reinforced with a ribbon/string. A thicker and more durable triangle is obtained by weaving an entire square and folding it twice.

You can view all videos with triangle pieces on ruutupunontaa YouTube channel on the embedded video playlist below. 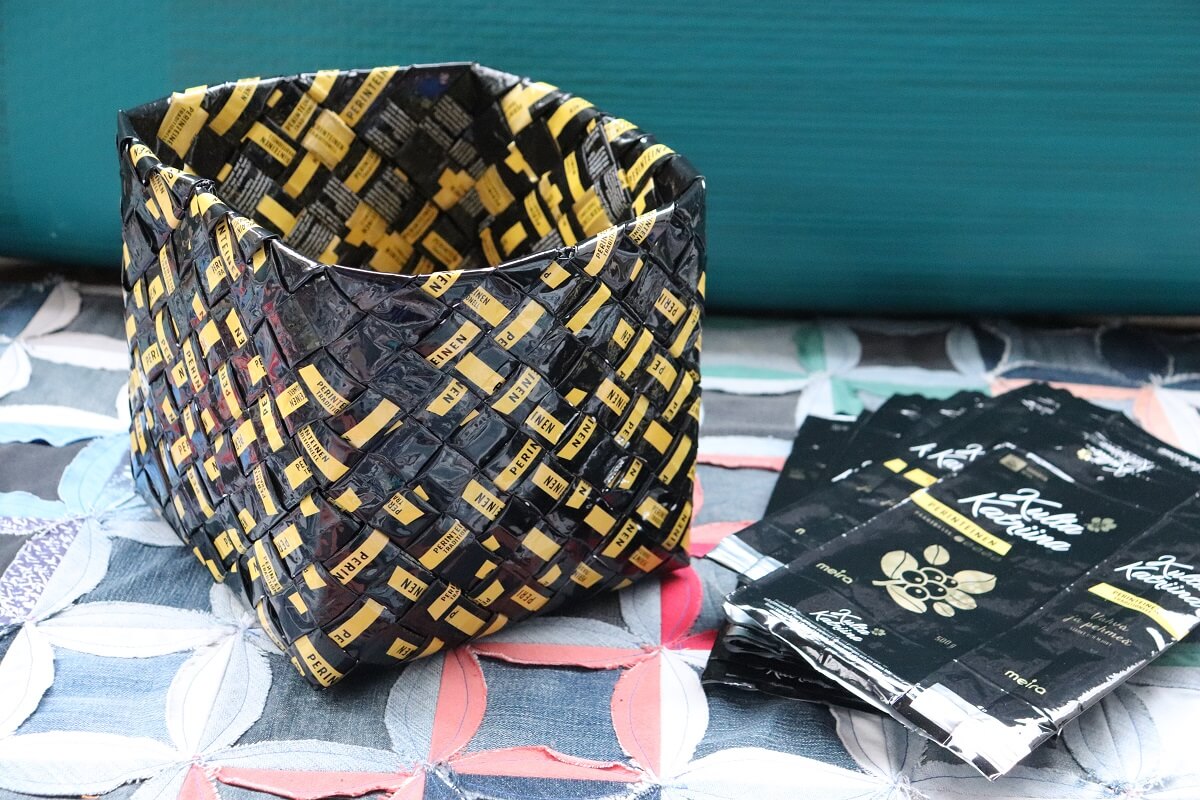 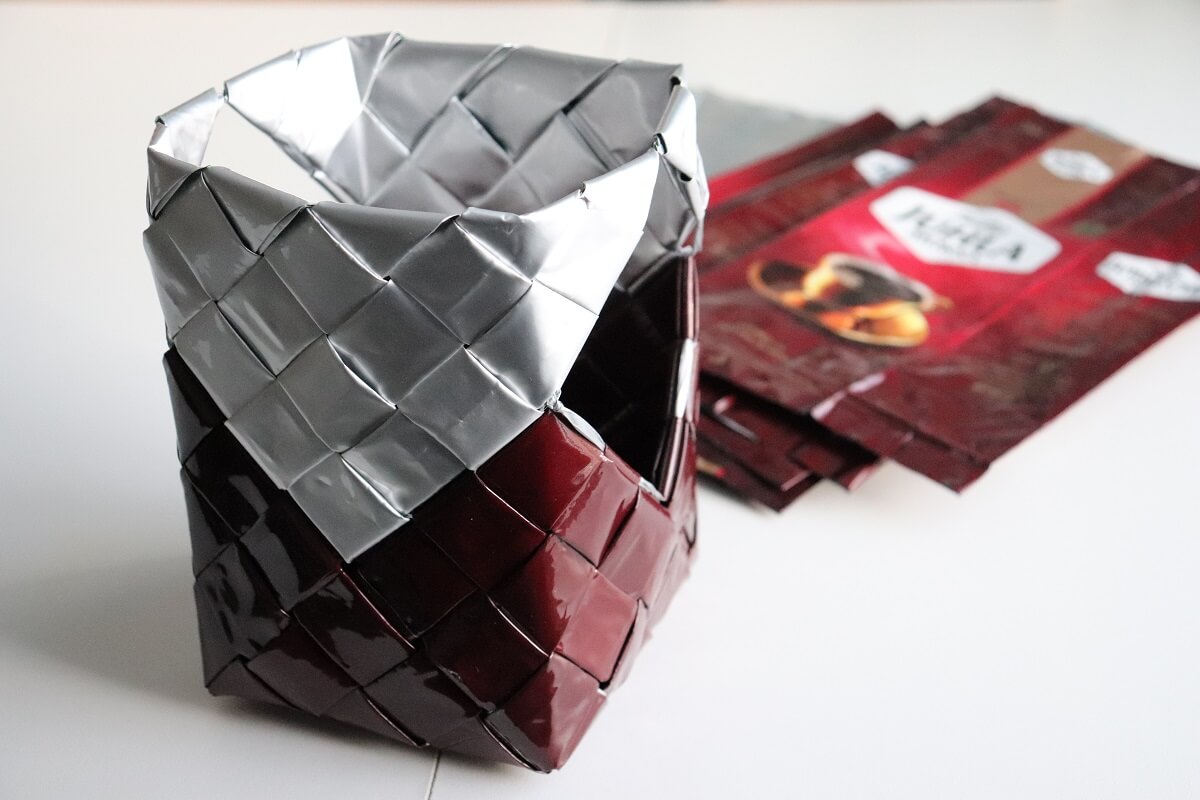