Coffee bags have a lot of different great patterns and countless possibilities to use them. From patterned coffee bags, you can weave miscellaneous squares or design patterns that suit your own style. Most coffee bags (for example, Juhla Mokka and Kulta Katriina bags) have enough monochrome parts at the top and bottom to be able to weave monochrome squares. A template with cut holes in the visible parts of the strip can be used to design the pattern for weaving coffee bags.

Most of the patterns on this website have been designed with this template, but you can customize the template to fit your own preferences.

The size of the template and the placement of the openings can be tested by weaving one square, marking the visible parts of one strip (or in this case two because two different widths that are used here), and deconstructing the strip from the square. This way you can see where the parts of the coffee bag will be visible in the square woven in your own weaving style and you will get a more accurate design with the template. The marked strip can be made into an exact template by cutting the colored squares into openings from which the pattern of the coffee bag can be seen when the strips are cut. This works well for designing patterns of different widths. In the precise design of the pattern, it is good to take into account that when joining the squares, the strips still rotate a little. The strips can be arranged even better in the finished product but preparing for the movement of the strips makes it much easier.

Strips of different widths can also be combined in a square weaving. When designing strip widths, the compatibility of the squares must be kept in mind, as the hinges must be compatible in adjacent squares. It is also a preferable to divide the number of strips by two so that the same strip does not form hinges on opposite edges of the square. In this case, every other strip does not form a hinge at all and the strips forming the two hinges can be too tight on the square. However, using odd amounts of strips is quite possible, but only more cumbersome. In this square, strips suitable for weaving 6×6 squares and strips suitable for weaving 8×8 squares have been used, in addition to which a suitable third strip width has been calculated so that two of each come in parallel. Some of the strips are cut from Presidentti bags and some from Juhla Mokka bags. The colors of the strips are also designed to continue in the same line around the basket and partially under the bottom.

The squares can be woven combining different widths of strips. The widths can be experimented by trial and error, or calculated with the equation described in the basic square weaving instruction. 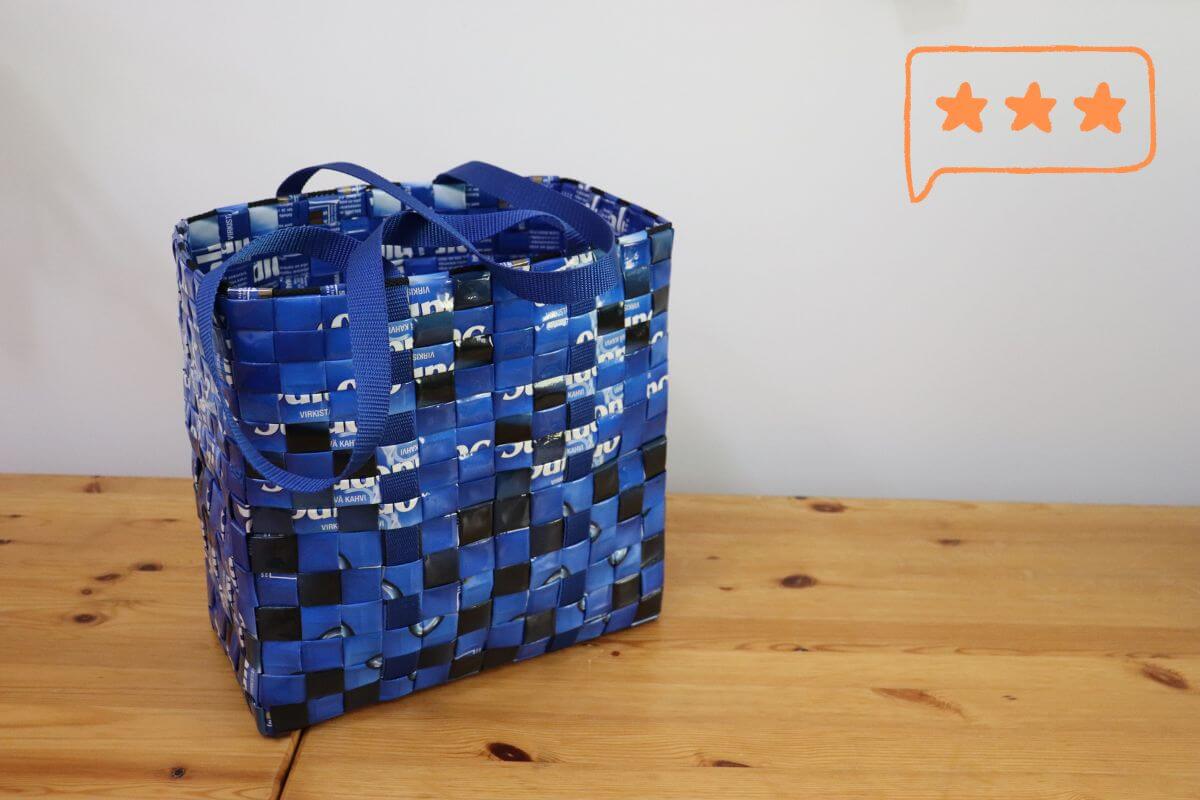 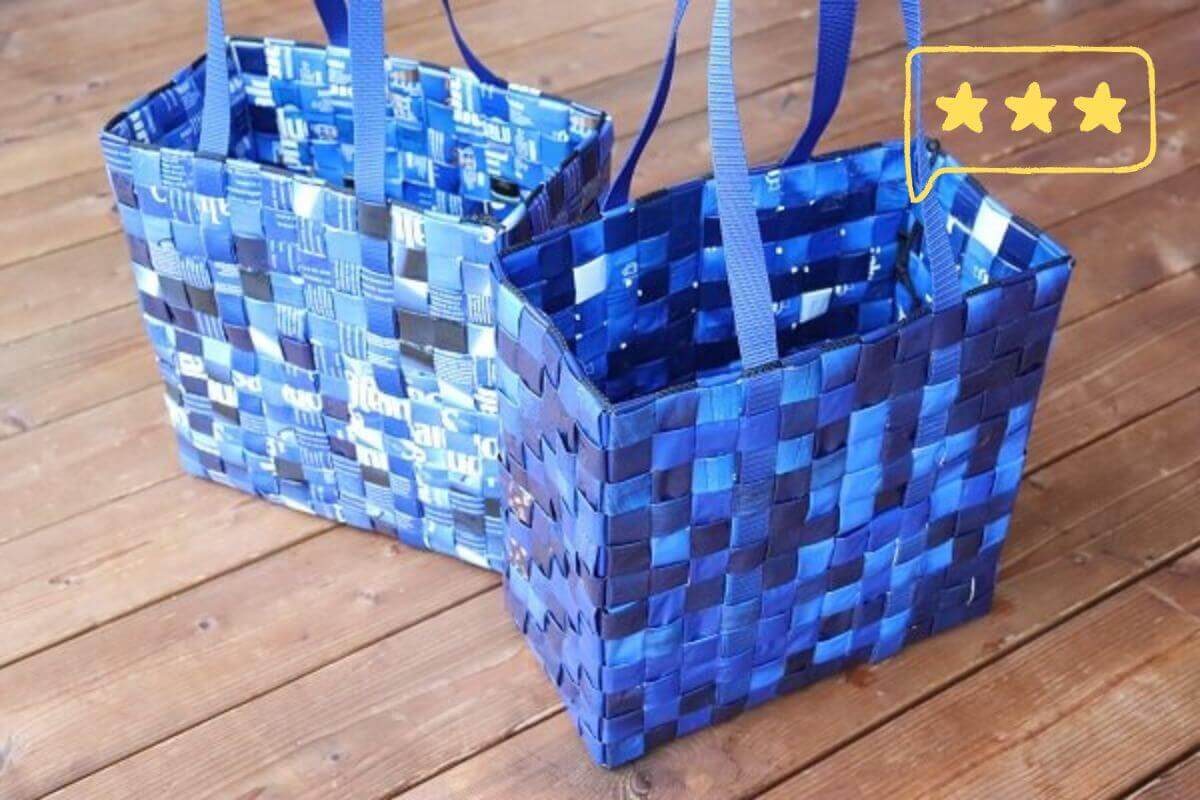 Square weaving technique is mostly used when weaving the same width coffee bags, however square weaving can also be used to make rectangles that are not square in shape. For example, you can find serving bags of different sizes in cafés, the width of which differs from traditional coffee bags bought to drink at home. These rectangular squares use silver strips cut from silver Presidentti bags and also wider Moak and Kulta Mokka coffee bags. (Pictures of the bags can be found in the Presidentti square weaving patterns.) Six strips have been cut from the wider bags with a 6.8 cm wide template. The widths of the strips cut from the Presidentti bags are calculated from the width of the wider bags so that the Presidentti strips can fit eight in parallel. When weaving these rectangles, you then need to think again about exactly how the squares will be joined. An example of a basket made of rectangles can be found on the blog. Watch a video on YouTube showing how to combine two different sized coffee bags on the square. 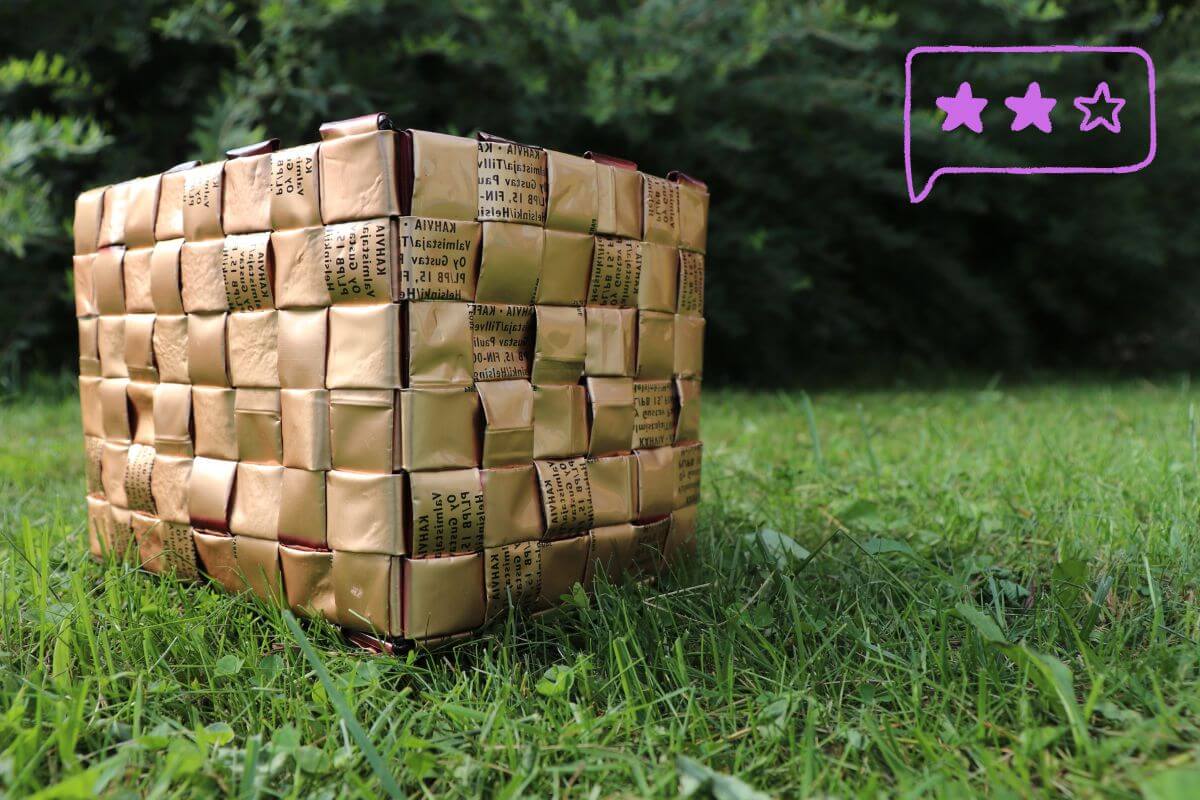 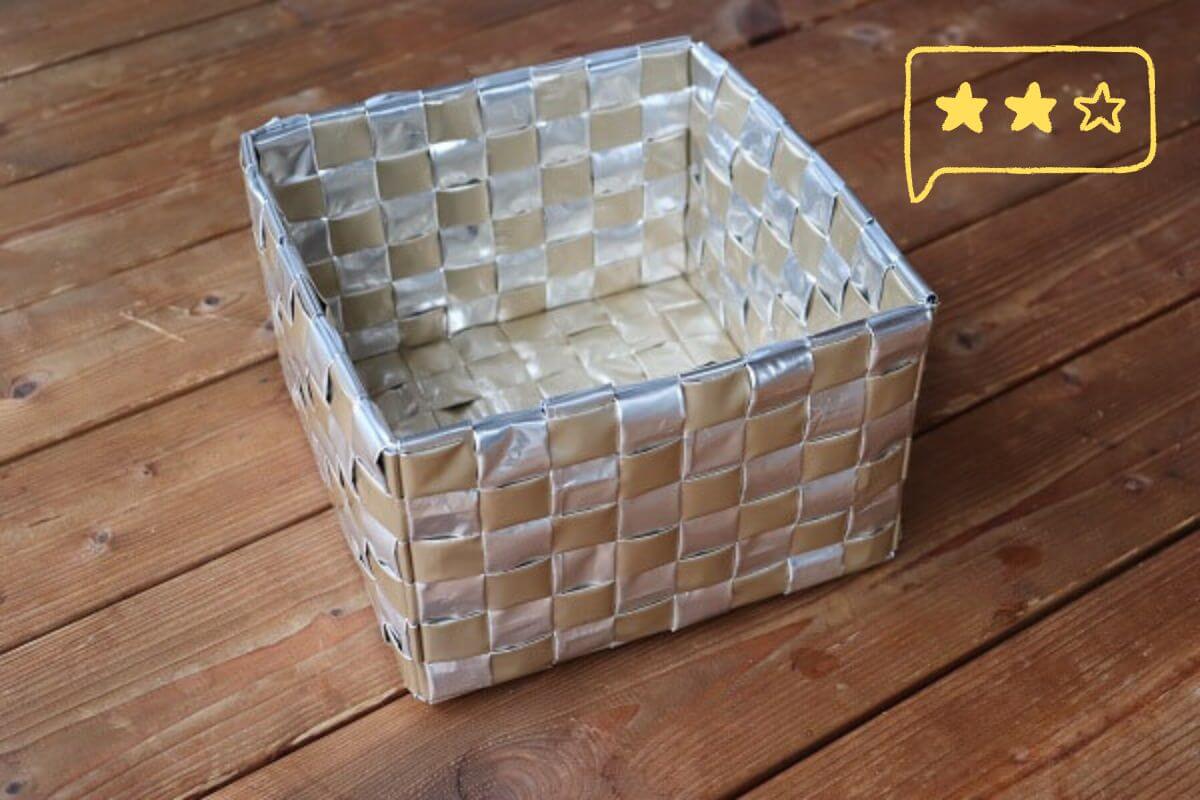